After Puno, my expectations were set a bit lower for Peru. A lot of backpackers head for Cusco after Puno. As I was waiting for my boyfriend to do Cusco, I headed south to Arequipa.

One of Arequipa’s many white traditional buildings.

Arequipa is also known as the White City due to all of its traditional colonial white buildings built using local white stone from neighboring volcanoes. It is a beautiful city with a lot of activities to partake in outside the city, one of the most famous being Colca Canyon. I’ll be honest, after Bolivia I was a bit tired of tourism. I really just wanted to enjoy the city. I spent most of my time eating and just planning my next moves. 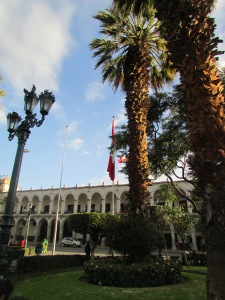 Arequipa’s Plaza de Armas was my favorite in all of Peru.

My workaway/volunteer that I had planned for April had fallen through. As such, I immediately looked for an alternative for the month I had left. I wanted to stay some place where I could learn to surf so with that as my parameters, I searched.

Lovely architecture to discover around Arequipa’s many corners.

Something popped up (well two somethings) and my hope was restored. My next two weeks would be spent in Huanchaco, Peru just outside of Trujillo followed by Lobitos, Peru, both little surf towns. Little did I know, I was about to have the worst workaway experience yet.