Florence is exactly what I expected, and then some. To be honest, I had heard mixed reviews prior to my arrival. Some loved it, some said it was ehhh. I liked Florence quite a bit. It is a perfect sized town. As Gaudi is to Barcelona, Michelangelo is to Florence, and his touch is seen just about everywhere.

I arrived mid afternoon on Saturday. I opted for something a bit nicer than a hostel. I stayed at Hotel Santa Croce  whose building was from 600 AD. This counted as a first as I hadn’t previously spent the night in something that old. I did have possibly the smallest room I’ve ever had, but as the saying goes, you get what you pay for. What was lacking in room size, was made up for in location. The location was literally 150 meters from Santa Croce, or better known for the final resting place of Michelangelo & Galilei. This was also a perfect spot to easily walk to some of the most famous sites of Florence.

A lovely winter day in Florence.

I spent the first day taking it easy. Mostly getting lost in the city streets and scoping out the famous Ponte Vecchio bridge. The second day I vistited the Accademia & Uffizi, the home of David & Botticelli’s Venus, respectively. I was a bit worried that the lines would be massive, or even worse I would not be able to get in as there are limited tickets. Fortunately, on the off season, you do not need to worry about this as much and more likely as not, you only have to wait for a few minutes. I also do not recommend trying to do more than two museums in a day.

Hallway in Uffizi, one of Florence’s amazing museums.

This is how I thought about David until I actually saw it. I came in through the side of the museum and was nervous I had actually just paid to go to the wrong place as there was little to no line. As soon as I turned the corner, there he was. He really is magnificent. Not like the Mona Lisa where you are expecting something a bit bigger. His size is part of what is so impressive of the statue. I’m going to leave it at that and hope it causes you all to want to visit as it is something that you just have to see for yourself. 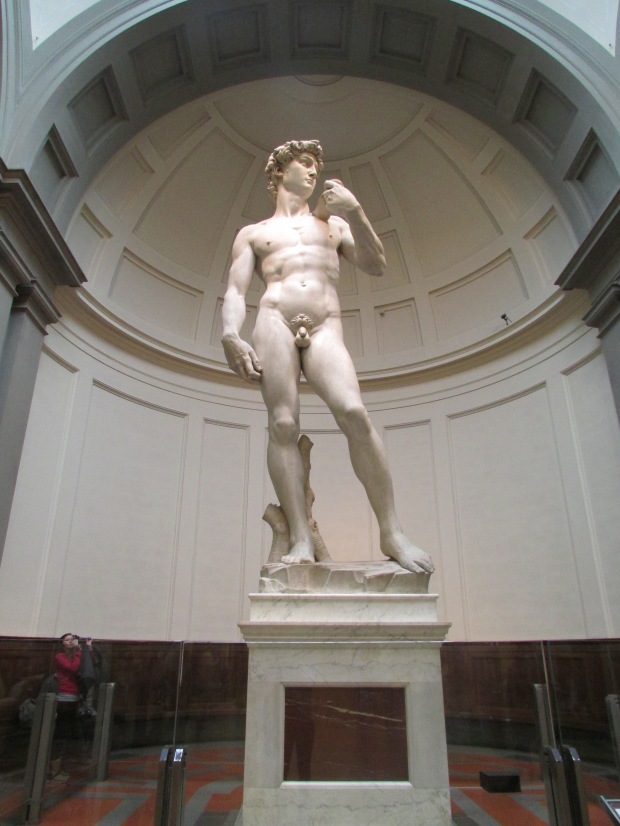 So when I was in Budapest this past November, I went on my first ever free walking tour. It was great. This prompted me to look for the same in Florence and fortunately I found one. The group was rather small, but it is the off season in Europe. This tour wasn’t as great as the Budapest one, but I would say on any of your next travels, you should look into free walking tours as they are great ways to get to know the city, get a few local tips, and even meet some fellow travelers.

Lets talk about food for a minute. I love to eat out. I think it is the best way to get to know a place and also a great way to build memories. On Sunday night, I found a little place near the hotel. It wasn’t too crowded, and a lot places in the area were closed for Sunday. I had pasta and red wine followed by tiramisu. I can’t say it was the best meal of my life, but it was certainly good food, which at times, is hard to come by. The staff was great and made it an easy place to eat alone. They even gave me a free shot of limoncello. Salute!

The next day I had the menu del dia at the restaurant recommended by the hotel. I’m usually skeptical of partnerships. However, they partnered with the right place as the meal was extremely filling, and for only 10 euros, I had an appetizer, a main plate, & a side. If you can plan ahead, a large lunch is usually a better deal than splurging on dinner. I also had Gelato everyday in Florence. It is really hard to say no when you are constantly passing Gelaterias. I tried the famous ‘Grom’ and am sad to say I wasn’t impressed. Perhaps it was the flavors (tiramisu and crème de grom).

Florence is a fun city with new places to discover around each corner. I think two days was sufficient and allowed me to get a feel for the classic Italian city. You can easily spend more time but two days was enough to entice me to come back at a later date. Plus, I am quite anxious to get to Barcelona. See you in Spain!

For me, there is a big difference between vacations and traveling. You can travel for work or you can travel for fun or something in between. Vacations are at least supposed to be relaxing. You decide where you stay and what you do. You are comfortable. And if you are lucky, you saved enough so you aren’t really concerned with how much you are spending as you aren’t staying for too long.

With traveling, it is a bit different. It is a lot of planning. It is usually also a lot of waiting. It usually means budget considerations. After having a good job with a good income for three years, this is proving to be a bit of a challenge for me. At least for me, it also usually means sacrificing comfort which can present itself in various forms, either by staying in hostels in order to stay on budget, or trying things that are outside of your comfort zone. I haven’t had to make friends all over again in over three years. However, when you step out of your comfort zone, you usually grow the most.

And so, in order to bring the best me possible on this trip (and not the stressed, neurotic Angela I’m sure most of you have at least seen glimpses of before), I took a vacation before the travels to relax.

I went to El Salvador over Christmas for about six days. This was my second trip and as most of you already know, it is where my boyfriend Ricardo is from so I feel like I have a different perspective than a random traveler who just heads to El Salvador. Whenever I tell people I’m going to El Salvador I get a few different types of comments. There are a) those who think it is in South America, b) those that ask if it is safe, and c) those who know.

I was originally one of the ones in group b. I remember my first trip and I was quite nervous. Heck, even my second trip I was a bit nervous. I don’t really make it a habit of venturing to places where the US has a travel warning for the country. I had these images of being robbed as soon as I stepped off of the plane, or getting pulled over with Ricardo and being robbed, beaten, or worse, killed. Of course, these were all the worse case scenarios made in my head. The actual arrival is quite different. I have never been more intimidated to leave an airport than in El Salvador, and not for the reason you think. It is seriously a family event to greet someone at the airport. You exit the airport and you are surround by swarms of people waiting. You can barely see which way to turn as you exit.  You feel like a celebrity, like everyone was just waiting there for you to arrive.

But then I became a member of group c, in large part to Ricardo and his family. El Salvador is not very large, which allows you to crisscross the country in a few hours. The days between Chirstmas and New Years were spent at the lake and then at the beach and then sad that we couldn’t stay longer at either. The weather at this time of the year is gorgeous everyday. Upper 80s but with a coastal breeze which makes it manageable. Where we were on the beach was like our own private oasis. There were a few people closer to the holidays but other than that, it was pretty much just you.

We’d wake up, have breakfast, go to the ocean for an hour or two. Come back to the pool when it got too warm. Have some snacks. Get fresh oysters on the cheap delivered right to your door. Have lunch. Lounge and drink and lounge some more. Needless to say, I could have easily stayed for weeks.

I had the luxury of having Ricardo drive me everywhere but tourists to El Salvador can enjoy the same relaxed atmosphere, it just requires a bit more research. El Salvador also has a moderate American influence, and by that I mean plenty of food options for the less adventurous. Given that their currency is the U.S. dollar, it is not surprising but also don’t expect for everything to be cheap in this densely populated Central American country. I found that food was comparable, although probably a few dollars less in the capital than you would pay in a capital in a U.S. state. Coming from Michigan though, where things are quite affordable, there was more on comparison price wise than I expected.

My personal El Salvadorean tour guide & I having lunch overlooking the ocean in El Salvador.

This is just a taste of El Salvador and I hope it has piqued your interest. Given that Costa Rica is already the target location for many expats, and Nicaragua’s new found popularity, El Salvador has a lot to offer without the groups of tourists you might see in the other Central American countries. If you are looking for an adventure off the beaten path, with friendly locals & favorable weather, El Salvador may be just what you are looking for.