We awoke excited at 5am. Of course, the driver was not even ready for us at the given time. We drove across the entrance to the flats at day break so that our first view of the flats was just before sunrise.

The salt flats are amazing, awesome, otherworldly, and breathtaking. I thought I would have been desensitized given all the pictures I had seen. The pictures do not do the salt flats justice. They are beautiful and massive. They are fun to be on. I took a ton of random pictures but they just make you happy. 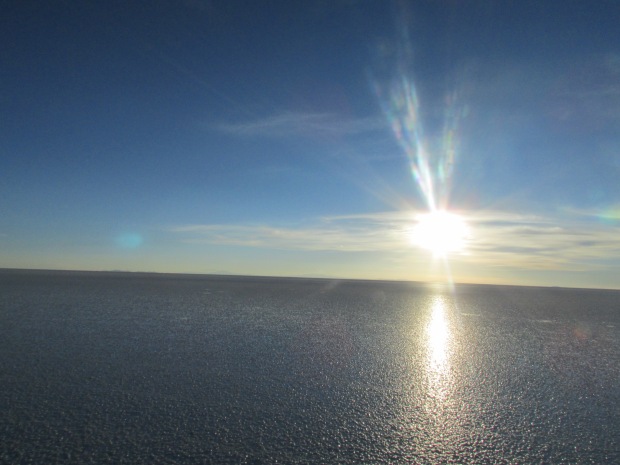 Made it to the Salt Flats for the sun rise.

Overlooking the scenery from the lone island in the middle of the salt flats.

It is a vision unlike I’ve seen before. Very unique and wonderful colors. We stopped in a few places across the salt flats. We stopped at an island in the middle of the salt flats that had cacti and a beautiful hill overlooking the flats. This cost 30 bolivianos to walk through but it was worth it. We also were able to enjoy a nice breakfast here (and more pictures of course).

On top of one of the salt pyramids as one of the last stops on the tour.

One other cool thing about the salt flats is that you can actually pierce the hexagonal shapes and pull out crystals. Our tour guide showed us this and it was really neat to see the salt crystals in their natural form. Nature really is a beautiful thing that I do not know nearly enough about.

The hexagonal shapes on the salt flats. 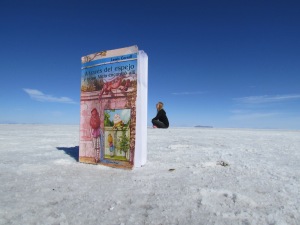 Having some fun on the flats.

The last stop on the tour was the train cemetery. It is just outside the city of Uyuni and in my opinion, is sad. The trains are remnants of the last mining boom in the area and all the trains that used to come and go. It reminds me of Detroit and the pictures just remind me a bit of the much debated ruin porn that Detroit has come to be known for. In an ideal world, places like this wouldn’t exist and the trains would be properly recycled, not left to be graffiti{ed} and fits of tourists to trample over.That is just my personal opinion, and more likely than not because it hits a bit closer to home. Some food for thought I suppose.

The train cemetary in Uyuni.

We started the next morning at 8am at the location of the tour office to be picked up. The first half hour was just driving to cross the border and going through border patrol in Chile and then in Bolivia. Both were pretty simple but it was already a bit chile and we hadn’t even reached altitude. We had a brief breakfast before our first stops, Laguna verde y laguna blanco.

The views out here are incredible and I’ll let the pictures speak for themselves.

Beautiful first stops at Laguna Verde and Blanco in Uyuni.

The next stop was the thermals which was amazing! If there was any place I’d be quite content for hanging around for a few hours it would surely be this one. The view out of the baths was breathtaking and the water was a perfect temperature. The sun was shinging and you were surrounded by mountains. Not sure what more you could ask for. You do have to pay a nominal fee to enter but for 6 bolivianos or just less than a dollar, it is worth it.

View from my spot in the Thermals. How nice is that view while you are soaking in natural springs?

We then headed off (somewhat reluctantly) to the Salvador dali desert where the landscapes resemble something out of his art. I think we stopped at a few other lagunas and some geisers along the way but they all seemed to pale in comparison to laguna Colorado. We had our lunch first and settled into our rooms for the night but then we took our own walk around the lake.

Laguna Colorado seems to appear out of the middle of no where. There are so many flamingos as well. You can hike up a relatively minor hill and then look out over the whole laguna. There is also a mini lookout point where you can learn some information about flamingos. 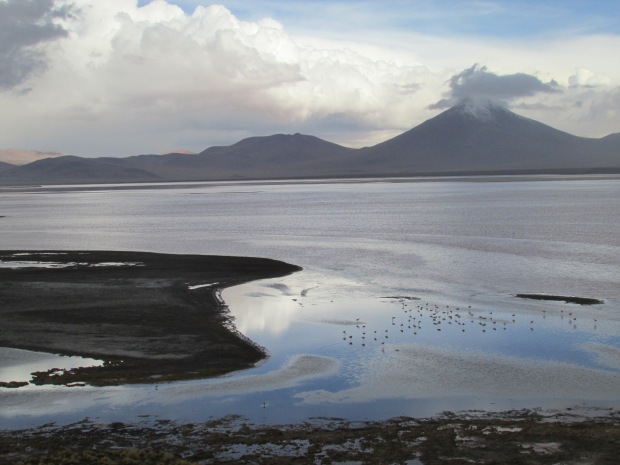 Laguna Colorado in Uyuni Bolivia. You can walk around about half of the Laguna on a nice pathway.

After some nature viewing, we headed back for tea and then dinner. During the tour, you are with the people in your car the entire time. You become pretty close. My car had a couple with one being from Michigan and another from New Zealand, and another couple from France. I had a great car and everyone was so friendly and easy to talk to. I even learned a new card game from Italy called scopa.

The next day we left around 8 and crossed more of the Uyani area. The Uyuni area of Boliva is huge and you just stare in awe a lot of the time at how much space and untouched nature there is. We stopped at a few more lagoons called the altiplanos lagunas. Who knew there were so many lagooons in the middle of the desert? As we decreased in altitude the weather got a bit better and not quite as cold. We were at almost 5000 meters the night before. That night we stayed at the hostel de sal. It is right outside the salt flats.

We had hot showers and electricity and after some time without these now accustomed to luxuries, they felt amazing. The next day was the main feature, the Salt Flats.

There are so many companies that travel to Uyuni. It is overwhelming. All the prices for the 3 days 2 night tours (ending in Uyuni) are from 80.000 to 105.000 CP (130-155 USD). I decided to spend a bit more than the cheapest for hopefully a bit nicer accommodation, food, and jeeps. After spending a full half day wandering around I settled on Estrella del Sur.

Almost every street like this in San Pedro is lined with Tour Companies.

It helped that I went to the tourist office which had a book of complaints/thank yous (Thanks for the tip Wikipedia!) and Estrella had a ton of compliments. The tour left the next morning and I was happy that a decision was made. Now time to prepare.

Well first, since I decided to stay an extra night, I had to find another place to stay and try to save some money from the tour I just booked. I booked a hostel for half the price I was paying (12 vs 24 USD) and as the saying goes, you get what you pay for. I then had to exchange CP for Bolvianos and CP to USD for the visa fee. I also had to buy water and some snacks as there are not many stores on this journey. Another important item was to charge all of my electronics as the accommodation is less than stellar throughout Uyuni. Word of advice: If you aren’t up for roughing it, or close to the equivalent of camping, the 3 day tour may not be for you.

So I think I’m all set ready to go, waiting for two Canadian girls I had met to meet up for a drink, when I realize I somehow lost one tennis shoe while changing hostels. To make matters worse, it was 8:45 pm and all the stores were closing. I retraced my 5 minute walk and went back to the other hostel to see if they found a shoe. No luck.

I am so lucky the one trekking store in the area was open just after nine. I literally asked for the shoe in my size and he closed the doors of the store. All I can say is, I would have been devastated if I didn’t have tennis shoes for this. Although this was more of an adventure than I hoped, the real adventure started the next day.