We were dropped off in the middle of some mountains after 6 hours on minibuses that seemed capable of falling off the side of the cliff. 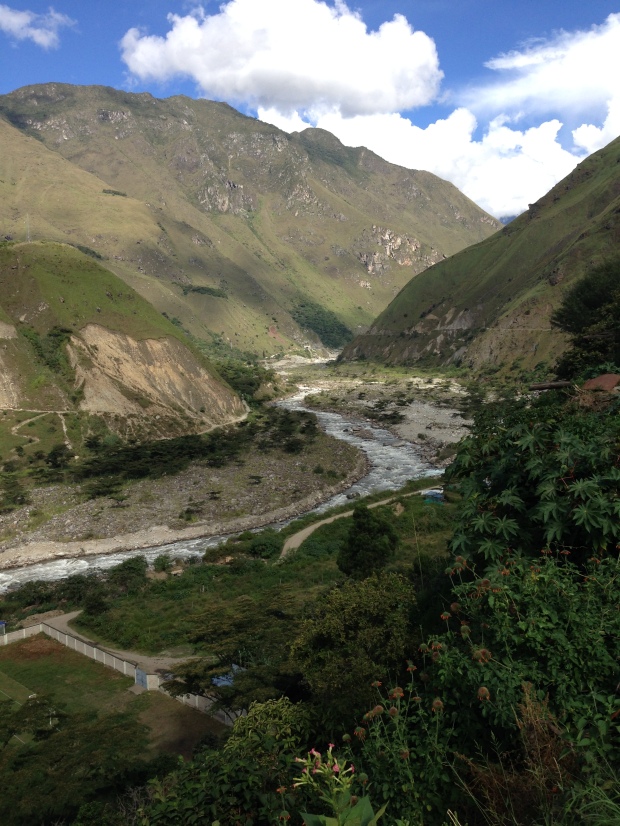 On the way to Aguas Calientes

Hydroelectrica.  A required stop for anyone trekking to Aguascalientes. We walked across a make-shift bridge that would never fly in the U.S. We then headed into town where the smart people could take a 30 minute train ride into the little town. Ricardo and I decided to hike. After a quick stop at a restroom, we hit the trails. It was only supposed to take around two hours, it probably took us closer to three.

You would pass people along the way and ask how far. At a certain point, it just became depressing so we just smiled and walked past. We saw some animals along the way including guinea pigs. Intriguing to see since we knew, by that point, what guinea pig tastes like.

It started to get dark and there still wasn’t much sign of the city. There was also a train tunnel that said to not walk through. We didn’t see any other way around though, so we proceeded. It then started to rain and we wondered if we were ever going to make it to the town. We found some other lost souls along the way who didn’t know where to go either.

Eventually, we found the city and we made our way into town. Now, at this point, I had gone on a few hikes throughout South America and I had also been more active than I had been in years. What had happened? Why was I so exhausted from a 2 and a half hour hike? Thank goodness we were taking the bus up the mountain tomorrow.

We waited for our guide to take us to our hotel for the night. We walked past all the nice hotels to possibly the worst hotel I have ever stayed in. I’m not even sure you can call it a hotel. There was no real water, and of what was there, it was freezing. This was even worse than the hotels we stayed at on the salt flats of Bolivia, at least those felt semi-clean. We only had to be there for a few hours though so we sucked it up and called it a night. All for the sake of adventure. In the morning, Macchu Picchu.