Lovely. Beautiful. Simple. These are the words that describe my first full day in Grosseto. It was a slow day, but it was lovely. The day before had been a blur. I had been up for around 24 hours straight with maybe a few hours nap that I managed on the plane, but it didn’t seem like I slept through that much. It was followed by 3 trains. That kind of transportation kind of messes up your sleep cycle. 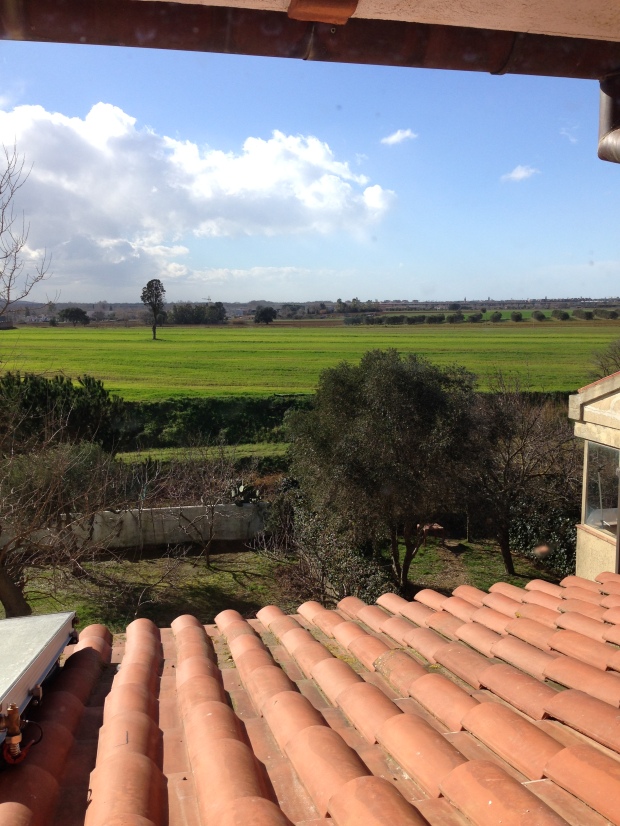 View from my window. Is that Tuscany or what?

That’s part of the reason I was so happy about the situation I arranged in Grosseto. There is nothing better than being greeted at the train station and not having to worry about where you are going. The family I am staying with was there to pick me up. After a short drive to their home, I let them know that I didn’t need anything to eat, and went to bed in my own room with my own bathroom. You have to pay for hostels and this was 10x better at least. The generosity of this family speaks for themselves. The next morning, they laid breakfast out for me as they would both be at work. I woke up extremely late (12 and ½ hours later around 11:30am local time) and quickly showered and went downstairs. I heated up the coffee and had toast with orange juice. Shortly after the husband came home and we said brief hellos, as he knows very little English and I know even less Italian. Once the mother got back, we had lunch which was a delicious pasta with ham, oil, and tomatoes that was simple, yet I am positive I could not recreate it. I had a glass of red wine which was so smooth, I knew I had to be in Tuscany. This is the Italy that made Italian life luxurious. It wasn’t the tourist spots that or the fancy leather goods. It is the luxurious home life that comes with simple, yet delicious food and quality family time.

After lunch, we picked up their son from pre-school. We tried to stop by the sea, but it was so windy that unfortunately, we couldn’t walk along the beach but I can imagine how lovely it is in the summer.

We then headed back towards the city center of Grosseto. They ran an errand and we walked the main boulevard. The town is small. Easy to walk. I like it. It is classically European but much more manageable than the larger cities. The mother, I’ll call her V from now on, was worried I would get bored around here for a week. I told her, I’m looking forward to relaxing and being bored, rather than constantly anxious. [Update: I have not been this relaxed since probably my senior year of college, and that is saying something.]

A view of Grosseto, Italy from the wall that encircles the city.

As we got into the car, V’s mother called and reminded her of the Pediatrician. There wasn’t time to go back to the house so I rode with them to the doctors. Their son is absolutely adorable and quite shy when I try to speak to him in English which I’ve noticed is common of most children when they talk to someone new.

After the doctors, we went home where V prepared dinner and I played with A (her son). A is a typical boy in love with motorcycles and Spiderman. Dinner was like the entire day, simple and delicious. It was a meat with cheese, side dish of carrots & red wine. Some fresh mozzarella, cured meat, and arugula for an after dinner salad, and fresh winter melon (honeydew) for dessert. What is common for them, is a 3 star meal to me.

I’ve now gone over my entire day but I haven’t spoken much about my feelings. It is different being around people you aren’t familiar with. Most people I am comfortable with I have no problem speaking my mind. When I am with new people, I just care about making a good first impression and being polite. I’m also much quieter than I normally am. People have said I am shy, though I don’t think I would ever say it myself, but when I am first getting to know people, its undoubtedly a descriptive adjective for me.

At the beginning of each trip, I usually ask myself what have I gotten myself into. I am anxious and I feel a bit squirmish. By the end of today, I am so happy I took this chance. Although it isn’t always easy, I know this is the person I want to be. Learning a bit of Italian so I can speak with the boy, trying new things, and understanding how the rest of the world works. They have already invited me back when the weather is better and I can’t help but feel a bit more comfortable, somewhere else on the other side of the world. That, in itself, has made this trip worth it.